(January 14, 2019) Author and University of Sydney (Australia) professor Sal Babones is a New Jersey native with a PhD from John Hopkins and a 1991 undergraduate degree from Alabama’s Montevallo University. During an interview he draws on his experience to observe:

In Alabama people had to reckon with racism. They knew they had a racist past and they were sensitive about it. Whereas in the North there is much more casual racism. That’s because in the North everyone can say, “[Since] I’m a Northerner, of course I’m not a racist.”

White Southerners have been coming to terms with their racist past for at least seventy years. Most anyone wanting to leave Confederate statues in place is as much aware of that past as they are of typical the Confederate soldier’s driving motivation to defend his homeland. Perhaps the most influential voices that led them to a racial reckoning were fellow white Southerners who were brave enough to criticize their own society at a time when such criticism outraged some neighbors.

Examples include William Faulkner, Harper Lee, and Carson McCullers who criticized Southern racism before the 1964 Civil Rights Act through novels such as Intruder in the Dust, To Kill a Mockingbird and The Heart is a Lonely Hunter. Even Civil War historian Shelby Foote wrote in the afterward acknowledgments of the second volume of his three volume Civil War narrative released in 1961:

. . . I am also obligated to the governors of my native sate [Mississippi] and the adjoining states of Arkansas and Alabama for helping to lessen my sectional bias by reproducing in their actions during the several years that went into the writing of this volume, much of what was least admirable in the position my forebears occupied when they stood up to Lincoln.

Alabama’s Joe David Brown is perhaps the least celebrated of all the early racially sensitive Southern novelists. His Stars in My Crown for grade school students was written in 1947 and produced as a movie in 1950. Next came Kings Go Forth in 1956, which became a movie in 1958 staring Frank Sinatra, Tony Curtis, and Natalie Wood. Sinatra and Curtis play two World War II soldiers who fall in love with a French girl whose deceased father was black. Sinatra plays the “good guy” from New Jersey while Curtis plays the “bad guy” from Mississippi. It was Hollywood—not Southerners—that cast the white Wood as the racially blended lover. Although Brown’s final novel had less racial implications, 1971’s Addie Pray is a humorous Depression-era tale of a wandering Southern ne’er-do-well’s con games in the company of his grade school daughter. Hollywood lost much of the humor when it changed the title to Paper Moon and the location to Kansas in Peter Bogdonovich’s 1973 movie. 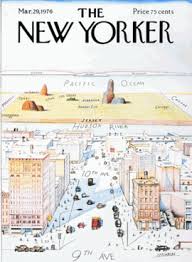 Nonetheless, as the famous magazine cover pictured above suggests, New Yorkers are just as prone to sectionalism as are Southerns. Yet I am unaware of any literature by Gotham area residents that reflectively challenges their own erroneous perspectives, particularly of Southerners. For example, notwithstanding that they represented 60% of the region’s population after the Civil War, Eric Foner’s Reconstruction textbook ignores the experience of white Southerners except to portray them as perpetrators of violence and discrimination against blacks. He shows little comprehension for the protracted poverty that affected both blacks and whites of the former Confederacy. Getting an Ivy League education was merely a matter of a different subway stop for Dr. Foner by comparison to what it took for a white Southerner of his age to get one.

Similarly, if Philip Roth’s Portnoy’s Complaint is a valid indicator, the introspective novels of New Yorkers show no appreciation—or even awareness—of other American cultures. Roth’s protagonist looks inwardly only to reconcile his elevated self-image with his shame about sexual obsessions. Although humorous, the novel actually amplifies the main character’s provincialism by treating sexual conflicts as if they were unique to his culture.

To document that New Yorkers are capable of critical self examination, show me more than Portnoy’s Complaint. Before demanding that Confederate statues be destroyed, show me books in which New Yorkers—and Northerners—examine their own faults and misperceptions about white Southerners. Show me Northern authors who are brave enough to criticize their neighbors for demeaning white Southerners. I

For Christmas consider buying one or more of my books at My Amazon Author Page: